This is the first of a new series of “what’s up with yt” blog posts I’m going to be writing. By keeping this log, I hope that maybe some things that would otherwise get lost in the version control changesets will get brought to greater light. This covers the time period of the first couple weeks in January.

This can be an expensive operation, and it comes with a few important caveats. The first is that right now, you are not necessarily going to sample the centroid of the Gaussian, and so this simply may not work correctly unless you have many, many star particles clustered together. I hope to eliminate this problem by moving to an integration method that is aware of the underlying function (erf / gaussian) rather than a pure sampling method and rectangular integration. The second caveat is that this cannot, in its current form, be used for radiation transport, as the method is not conservative of flux from star particles: even relative luminosities from star particles cannot be trusted. This is currently a pure-visualization algorithm. The solution to the second issue is not clear to me yet.

To use this, you will need to re-Cythonize your yt/utilities/amr_utils.pyx file. Then rebuild your extensions. As of right now, there are no real convenience functions for rendering star particles, so the following relatively verbose code has to be used to add them appropriately to the volume renderer. This assumed you have created a camera object.

Now when you render, it should add the star particles. In the future, once this feature leaves beta, this will be much easier to do. For a complete working example, see http://paste.enzotools.org/show/1482/ .

Here’s an example image of just star particles being rendered. It’s fuzzy and doesn’t look like much yet, but it shows the basic concepts. 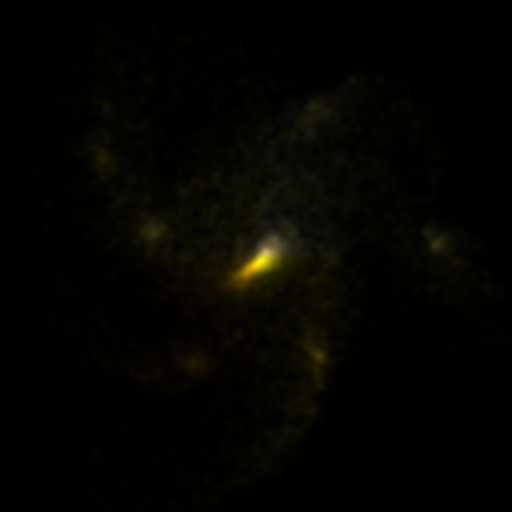 Enzo, as of 2.0, can now output Friends Of Friends catalogs on the fly during a simulation, along with particle IDs of particles belonging to those halos. Identifying mergers between the halos found with this method was not implemented, so last summer I wrote a small script to do so. I’ve added it to yt/analysis_modules/halo_merger_tree/enzofof_merger_tree.py. You can access it by amods.halo_merger_tree.EnzoFofMergerTree. This function accepts two ID numbers and loads the corresponding catalogs. It then calculates the parentage and childhood percentages of each pair of halos that it can identify.

This means that you get back a set of tuples, describing the percentage of particles from one halo that went to make up a child halo, as well as the percentage of that child halo’s particles that came from a particular parent halo. JohnW then extended this to output a graphviz plot of how the halos merged and formed over time. He also added the ability to avoid halos that are too small and a couple other feature additions.

It’s a very simple system, but it works well for the EnzoFOF calculations. In the future, I see it acting as a supplement to StephenS’s more complicated and capable merger tree identification system.

This week my yt development was mostly focused on getting the yt documentation brought up to the current state. To that end, I re-organized it to fit into a better conceptual flow, added in the orientation section I wrote last December, and asked for feedback from a couple people. JeffO in particular gave extremely helpful comments about the structure and flow. I think that overall it’s much better. StephenS also updated his docs to reflect the new import scheme. The documentation is now de-coupled from the version control repository. This should help keep them up to date, as we no longer have to execute a build and check that build in to update the online documentation. With this change, I think we’re now ready for release, so hopefully sometime today that will go out.

ChrisM and JeffO committed and pushed changes to add MAESTRO support to yt. This is very exciting, as it’s another BoxLib code that seems to be supported without a lot of engine rewriting. Hopefully this will be useful to a number of people.